Ethel Saved Our Marriage, and Other Hollywood Adventures 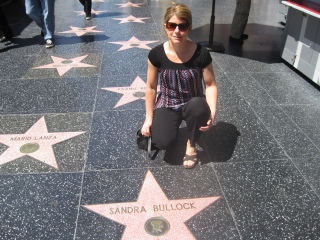 And it’s all due to Ethel.  Ethel is our GPS lady, a Christmas present we gave ourselves.  It has proved the Yoder family well – we haven’t fought  over how to get places, and we looked rather hip strolling into Hollywood like we were frequent flyers to the area.  We didn’t look too much like the Griswalds rolling out of our rent-a-van with Illinois plates (although Ron did have a John Deere T-shirt on, but our Cali cousin wears one, too, so it’s all good).  Ethel even guided us out of the XXX district to where the real tourist were.  And they were expecting us! We were greeted by Spiderman, Batman and multitudes of other tourists. We didn’t have to worry about sticking out like country bumpins because everyone else were bumpins of some sort.  We played the whole Hollywood scene by getting pictures by the stars. Kent even got a few pictures with Star Wars Storm troopers.  That made his day. 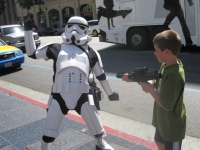 But the day couldn’t be complete without at least one tourist blunder. After one teenager asked, “Is this all there is to Hollywood?”, we were approached for a limo-tour of Hollywood by a somewhat-trustworthy-professional-looking-man.  After detecting $200 was not is this family’s price range, he gave us a great deal for an open bus tour that turned out to be quite affordable (tip number one).  The kids voted yes because we could see the sites, Ron voted yes, because it was a great deal, and I voted okay because I could catch some rays while seeing the sites.  The Yoder family voted  “yes” on the open air bus tour, and we were off!

It was all good until the business-looking-man handed us over to a man missing a few teeth.  He handed us over to yet another man who said “the bus is over here.”  We looked up and there was a pick up truck with something spray painted on the side, looking like it came from Sanford and Sons.  Man #3 opened the hand-welded door and we climbed in the bed of the truck  – complete with three bench seats and a variety of seat-belt looking things.  We were told they over-booked, could our children cram 4 in a seat for two hours in the beating sun with no seat-belt?

Mama said, “No, that’s not safe.”  At least I could play the safety card, I mean we are in politically correct California.

So the other party without kids crammed four in a seat and I didn’t feel bad, I mean, we paid good money to do this instead of the Hollywood Wax Museum.  Instead of seeing wax figures, we get to catch a glimpse of real star’s homes, and that will make our lives richer and fuller when we come back to Indiana.

I saw Tom Cruise’s chimney.  I am now well with the world.

As we were crammed in there, I shook Brocia’s hand (Kaylee’s BFF) and said, “Welcome to the Yoder family vacation.  You are now an official member” in joining our world class tour in the truckbed/tour bus.

We all started laughing, counter-acting the earlier pecking order episode, and Ron said the business-looking man used to be a lawyer until he lost his license.  We laughed some more and knew, somehow, tours in the back of a Chevy add some flavor.  I mean, who would want a limo tour even if we could afford it, anyway?

As it turned out, we did see quite a few sites, beautiful homes with names attached to them like Paris Hilton, Cosby, Leonardo Di Capri, Snoop Dog and Char (that’s how our Middle East friend pronounced it, Char).  We even saw the Playboy Mansion, not that my boys would be interested in that.  Illegal lawyer guy provided a pretty good tour, even though we had to stop the truck and have Middle East man wiggle the wires so the speakers would work.  I wonder if he ever thought the woman sitting on top of the speaker had something to do with that? Oh well, it all worked out in the end.

Overall, I think our teenagers were satisfied.  Seeing the ‘”stars” on Hollywood Blvd. was fun, but the kids just didn’t seem to revel in Frank Sinatra and Laurel and Hardy’s footprints like I did.  Mr.No-License Lawyer came in pretty handy.  Seeing the house where Michael Jackson died is a bit cooler than the tiny shoe prints of Joan Crawford from 1929.  Only a History geek would like that (I’m not naming any names).  The boys thought the stars of Michael Jordan and Chuck Norris were cool.  It turned out to be a good day.

And we also saw real Hollywood people, who probably left a greater impression on us than sidewalk stars, homes, or foot prints – a man talking to himself as he dug out of the trash, and a woman Kaylee’s age standing by the hotel on a corner.  That was part of our Hollywood experience, too.

So, thanks to Ethel, we had a good Hollywood experience.  We arrived rather peaceably, laughed and contributed to the local economy of every one else trying to make a living….the Middle East driver, the unlicensed lawyer, the Storm Troopers.  I don’t know what good we did for the man or woman outside the hotel other than realize they are people like us.  It balanced out our day between the Mansions and Motorized tours.  Balancing what’s real, what’s important, and what really matters.

Upon leaving Hollywood, I thought how our Lord knows everyone regardless whether others do or not. He knows the rich and famous, the country bumpkins, and the street culture of Hollywood.  All are known, and none are alone.  In His economy, we are all the same, nothing separating us one from another.

That’s the picture of Hollywood I’ll probably take back with me.  The name-dropping will be fun for a while, and the pictures with the stars are pretty cool as far as coolness goes.  But the greater picture is the wholeness of all the people, their stories, known and unknown, and how we all belong to the Living Lord. Our value is in Him, not where our riches lie.