"Just How Far Have We Come, Baby?"

While in the Dominican Republic last week, I made the comment to a fellow group member,
“I could not live in a sexist society.”
I’m not a feminist as in “men and women are the same” feminism, but I am for equal opportunities, differences in how men and women are designed, but not a big fan of stereotypical roles assigned to men and women by society.  I don’t know what that makes me, except one who is highly irritated at the comment, “so, Ron’s babysitting the kids tonight?” when I am not home in the evenings.

Back to the D.R… In November I went on a trip to the same village for a cross-cultural trip for my Master’s Program requirement. As it turned out, at the last minute, I became the only woman going on the trip with six other men.  Yep.  Talk about awkward, uncomfortable, and extremely difficult.  Throughout the course of the trip, I learned more about gender and culture than one could ever experience in one week.  It was intense and overwhelming to say the least.
Our task for that trip was pour cement columns for a church and lay cement block.  Ok, I can do that, I’m married to a farmer, and any farmer’s wife knows you have to learn to do things most women normally don’t do in the course of married life….like driving tractor with no prior instruction, carrying two five gallon buckets of milk from one building to another at 3:00 a.m., or climbing a silo for an evening of romance.  On a farm, when work needs to be done, there is no respecter of gender if able-body hands are needed.  So, I figured I would learn how to mix cement and lay block like the rest of the crew.  Not a big deal.
At least, that was, until we pulled up in El Pinon and I jumped out as the only woman with six American men on a work site with other Dominican men.  It was evident from the start that women do not work alongside men doing cement work in the Dominican culture as I had twelve year old boys literally take a trowel or shovel out of my hand while making cat calls at the same time.

This did not go well with me, and I immediately realized the week was not going to be so simple.  A woman in American society can work alongside men with (somewhat) a sense of equality while her womanhood is not demeaned.  In this situation, it became clear the people in the village I was working in did not know what to do with a single female working alongside men with no other women.  Was I am man?  Was I a woman?  What in the world was I ?
While I survived that trip, I was reminded of the impression the scene must have made on the people  as I returned last week.  On last week’s trip, there were 5 other women in addition to myself. One morning we were helping the church women in the kitchen fix food for our crew for lunch.  In Spanish, I heard the women laugh and say, “Brenda, in the kitchen!” 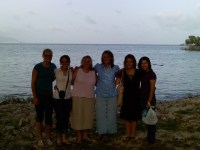 Needless to say, I was taken aback by this.  Internally I said, “Of course, I cook in the kitchen, too!  Just because I can shovel some rocks does not mean I am not feminine!”
Later as I was peeling native Dominican vegetables, one of the women asked me which I like best, working in the cochina (kitchen) or at the church.
I had Patty, our interpreter, explain to them that I live on a farm and I do work wherever there is work to be done.  When my husband is gone, I milk our goats.  Wherever work is needed, I do it.  And so does he.
I wanted to say, “What I do does not define me!  It does not define you!”  I cook in the kitchen, but I prefer not to.  I’d rather spend a day cleaning, pulling weeds, writing, or working outside.  I’d rather shovel than cook, really, but does that make me less a woman?  But I’d rather wear high heels and a skirt any day, so what does that say about my femininity?
There’s a lot more I can say…..the gender piece in history and sociology is something I have studied and taught with great fervor, and still brings a fire out in me when confronted with stereotypes supposedly defining gender.  But the Lord brought a great blessing to my life as I came back from the trip, from my raised-very-traditional-farmer-boy husband.  When we landed in Miami, my daughter texted me saying, “Dad painted your bedroom, got groceries, and is canning beans.”
This brought my experience full-circle in that, truly, our family has become an equal opportunity household.  There were beans to be canned, and my husband took the initiative to can them.  The laundry was done, he cooked all the meals, and vacuumed the house, all of which he has learned to do over the last two years as I have gone abroad now three times.   Up until I went to Italy last year, he never cooked more than heating things up in the microwave, and hadn’t done laundry since college.  Just as I’ve learned to milk cows, goats, and have driven a tractor on rare occasions, so has he learned to do the unfamiliar.
There used to be a saying “We’ve come a long way, baby” in the feminist movement of the 70’s.  A cigarette commercial if I’m not mistaken.  This would be fitting for my husband upon coming home last week, “You’ve come a long way, baby!”  It blessed me to see that our roles as man or woman is becoming less defined by what we do…..cooking, laundry, shoveling,  and more in who we are.
At the end of that week long experience in November, the pastor honored me in a service the last evening, calling me a “flower” among the group of men I was with.  I hope he came to that conclusion not just because I wore a skirt on occasion, but hopefully by something he saw in my character, something beyond gender or gender roles.
If every culture and every setting could look beyond the gender roles and more at character and personhood, then the slogan of “coming a long way” would truly fit.
But last week, I was reminded this battle is still one to be fought for women (and men) everywhere……in the U.S. and beyond……and probably will be until our Redeemer comes to redeem all of us to our rightful positions……

His son, His daughter, His beloved, with His character.
Until then, keep shoveling, or cooking, or whatever the task may be that reflects Him.