Recently my daughter and I traveled to an East Coast city to look at an internship site she is considering for next summer.  We’ve never been to this city.  We booked a B&B, made arrangements to meet with a mutual friend, and off we went.

I was marked by the experiences we gathered in that twenty-four hour period.  She’ll be interning at a small local charity that ministers to refugees.  In the ninety minutes we were there, we interacted with individuals and families from

the Congo, Iraq, Nepal, Thailand, and others who, we were instructed, did not know their true nationalities because they have been in so many refugee camps before arriving in the United States.

Each person was at home in this neighborhood ministry.  The ministry provides their clients assistance with food, clothing, and childcare while learning the English language.  In the face of each person I saw my immigrant grandparents.  In the face of the director and her assistant, and soon my daughter, I saw my social hero, Jane Addams.

When my grandmother came to America in 1930, she did not know anyone but my grandfather, of whom she had been

separated since 1924.  He came to the United States by himself, leaving his wife and infant children behind.  Both only knew his brother and wife.   When Maria Lazzara came, she left her family and village behind.  She didn’t know the language.  My father remembers going to citizenship classes with her as a small child.  This summer, her great-granddaughter will be teaching English to immigrant refugees.  Full circle, by God’s creative grace.

While we were also on this trip, we worshiped in an inner-city Latino church, attending both their Christmas program and Sunday morning worship.  Though Baby Girl is fluent in Spanish, I am not.  But I didn’t need to be.  I was moved by the joy, the music, the facial expressions of those around me.  I didn’t need a translator.  These individuals loved Christ with their entire being.  I was blessed.

We walked through different neighborhoods.  According to the news, these streets are dangerous.  But as one person said, “They are just regular people going about their lives, going to their jobs, raising their families.”  Good counsel.

That same weekend, a place I’m most familiar with experienced heinous violence.  “Just regular people, going about their lives, doing their jobs, raising their families.”  Now, according to the news, the school environment is considered dangerous.

Baby Girl left for Guatemala this weekend.   She’s returning to a place on a mountain that captured her heart this summer.  This time, she will be entering the jungles to translate for medical teams, near villages where drug wars broke out this summer.  Just regular people, going about their lives, doing their jobs, raising their families.

I hear a lot about stereotypes, fear, and keeping safe these days. If I submitted myself to stereotypes and fears, I would shrink back from encouraging BG to pursue these experiences.   It’s challenging to step outside comfort zones to engage with people and cultures we’re not familiar with.   It’s scary to step into places where dangerous things happen. 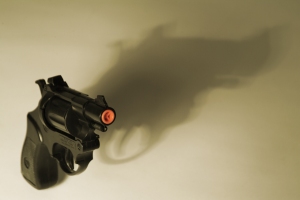 For me, danger does not reside with people holding weapons, and neither does security.  Security comes when we get to know one another, when we look into each other’s eyes, seeking to understand each other.  Fear builds when we add another “group” to be afraid of.   In our reach for more security, I’m afraid we’re reaching for more fear.

“Mom, anywhere I go, it’ll be dangerous.  I feel safe” she says.

A challenging statement.  Everyday I drive my car, not knowing with whom I’m interacting with on the roads.   It’s potentially dangerous, yet I feel safe.

Yet, it’s not.  I know in whom my security lies.  It’s my Heavenly Father of whom gives peace in the midst of pain, trouble, and danger. In Him lies my hope, my rest, and trust.

I don’t fear death.  But I don’t want to fear life.

In between, the challenge is finding and receiving peace.