Parenting Series: Child of Mine

As a school counselor working with parents who walk the path Amy Mitchell has with her son, it’s my privilege to share  her heart and journey.

You know that moment when you’re pregnant, and you imagine what it will be like when the baby is born?  Maybe you picture yourself just like the women in magazine ads: You, showered and dressed with your makeup on, holding your adorable, little sweetheart while she dreams in your arms.  Maybe you see other moms, at church or in the mall, feeding contented little bundles of joy until they drift off to sleep.  Maybe you remember what it was like when your sister gave birth last year to a baby who settled easily and seemed happy and calm most of the time. 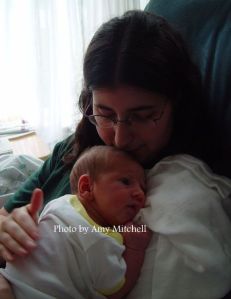 That was me.  And then reality happened.

My baby was born, and I wondered where on God’s green Earth this child came from.  Unlike all those perfect babies in the magazines, the mall, and my grandmother’s house at Christmas, my baby never seemed to sleep right.  My baby was fussy and cried all the time.  My baby was only happy if we were walking and rocking, and even refused a baby carrier or sling.

Even so, I thought that it would pass.  Well-meaning mom friends told me it would get easier once he was past this stage or that stage.  I watched other babies grow into toddlers and preschoolers and school-age children.  I observed them coming out of each stage and transitioning to the next one with ease.  I thought, This won’t be so bad.

Except that my child was one challenge after the next.

My child had more energy than I—or he—knew what to do with.

And yet, I still thought that he’d grow out of it.  I homeschooled him for a while, hoping that he would “settle down” in a couple of years.  I found ways to wear him out so that maybe he’d play quietly for a bit while I made dinner or read a book to his younger sister.  I sent him outside when I finally needed a break.

I sent him to school at last, because he has this intense drive to be around other people all the time.  All of the rest of us in our family are introverts, but my son is not.  I thought that giving him a broader social scene would enrich him.  It did, but he also had trouble sitting still and paying attention.

It wasn’t really all that different from what I’d seen at home.

When a teacher finally suggested that he had needs beyond her scope and recommended that we have him checked by a professional, we agreed.  We didn’t have any other ideas about how to help him.  What could it hurt?

It turned out he has ADHD.

I wasn’t surprised, really.  I thought, Well, he came out of the womb that way.  We worked with the school, the therapist, and the other members of the family.  We did what we needed to for him to be confident and

successful.  We prayed that it would get easier (we’re still waiting).

And then one day it hit me.

My son may use his brain a little differently.  He may have the energy of ten children plus two.  He may drive me up the wall with all the times he leaves a mitten or a homework assignment or his shoes at school.  He may speak without thinking or act without warning.

But I love him that way.

I wouldn’t want him to be a different child.  I like that he is a dancer and a saxophone player good enough to join the jazz band a year ahead of his peers.  I like that he reads anything he can get his hands on and makes up his own comic books about characters called Dorito the Triangle and Bob the Marshmallow.  I have fun losing to him at Mario Kart.  I love the joy in his eyes at every new discovery he makes.

Being his mom makes me feel like the most blessed woman in the world.  I wouldn’t change a single moment. 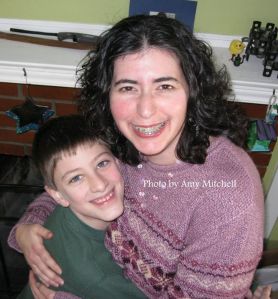 Amy is a homeschooling mom from western New York State.  She is a family woman, feminist, progressive Christian, reader, writer, and nerd.  In order to have the energy her son has, she needs at least three cups of coffee a day.  You can find her on her blog, http://unchainedfaith.com or follow her on Twitter, @amyunchained, or on Facebook at http://www.facebook.com/UnchainedFaith